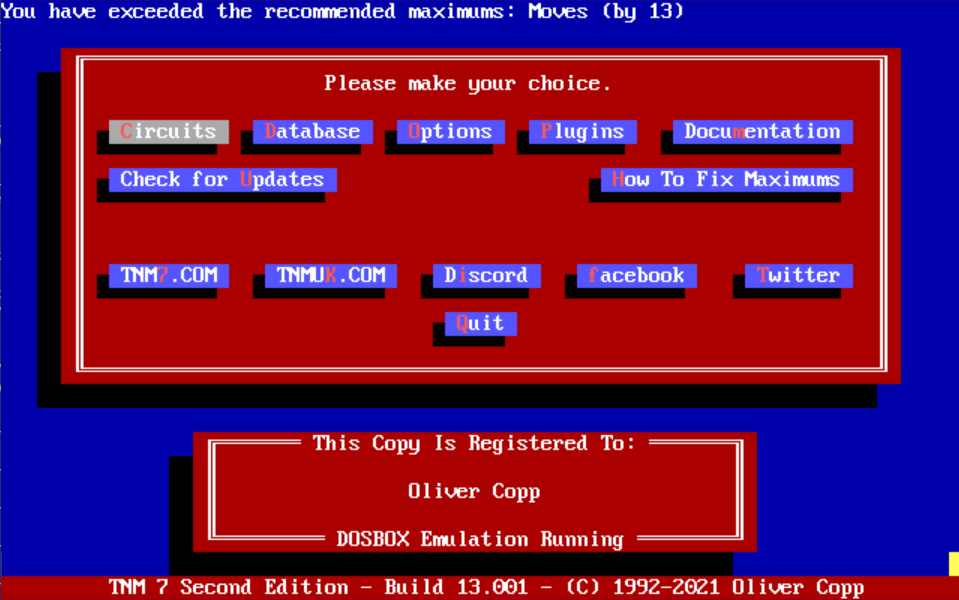 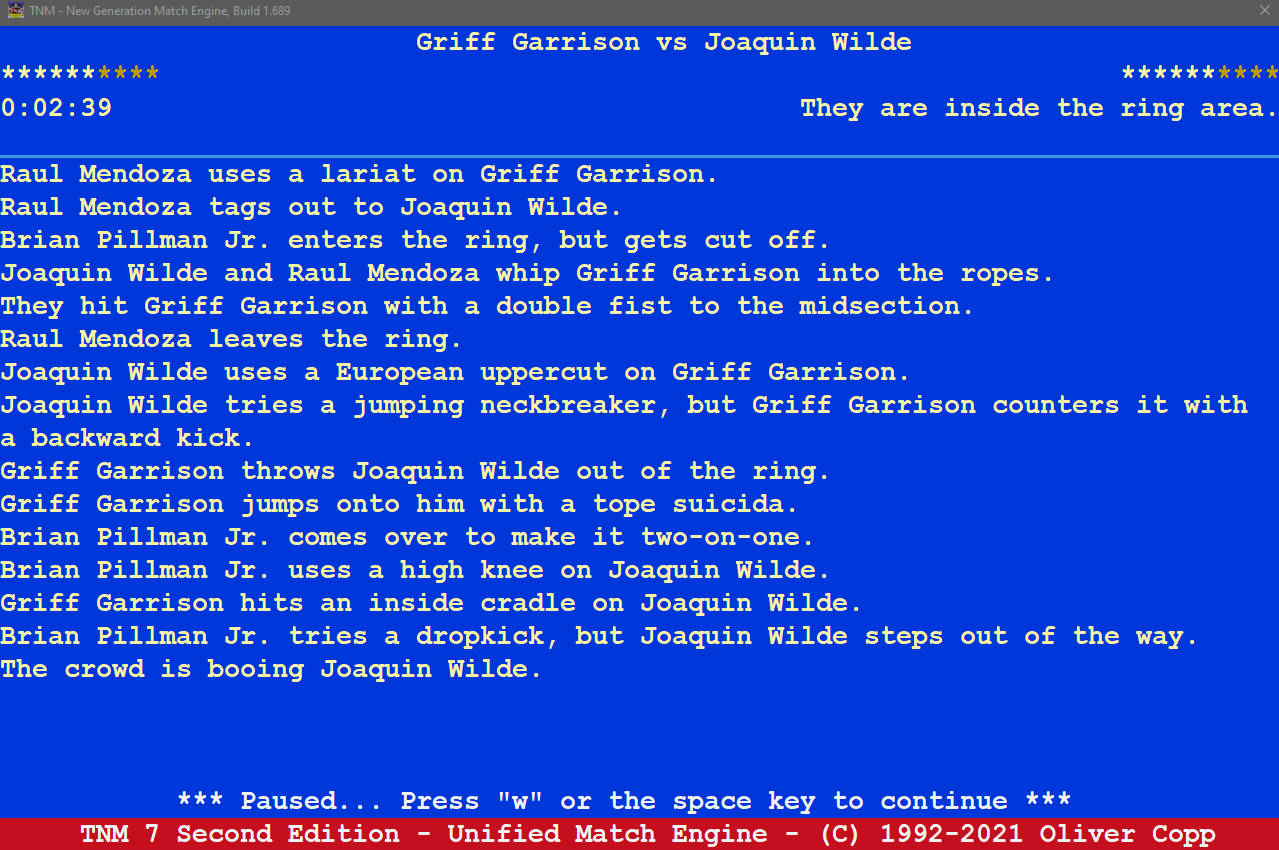 Ever since TNM Tournament Edition was released last year, we've been bombarded with one request more than any other: ''Bring the auto-scrolling match engine to our circuits!''

With Build 13, your wish is our command! TNM 7 SE's classic screen-by-screen match engine will be superseded by one that will make the experience of watching matches unfold way more fun.

Just sit back and read along - and the only time you need to press a key is if you want to pause the play-by-play.

The Unified Match Engine is a Windows program so match simulation is lightning-fast compared to what you're used to from DOSBOX. Press ''f'' to jump to the finish and you'll see what I mean. 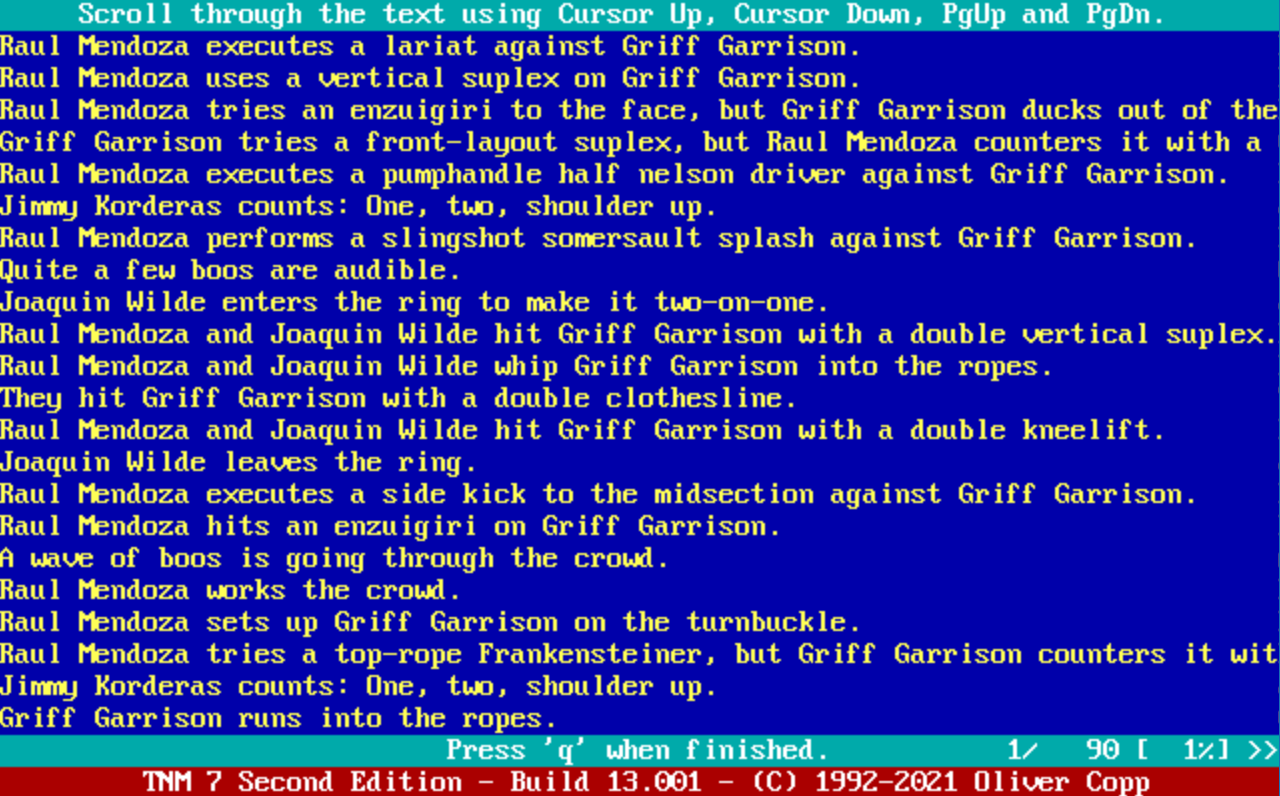 While you would previously save the finish of match by pressing the ''f'' key as the winner was being shown, you now also have the option of pressing the ''p'' key to keep the entire play-by-play for the entire match.

Being able to save the entire play-by-play meant that we needed to retire to the old way of being shown the match finish when browsing card results. It has been superseded by a text reader which allows you to move through potentially thousands of lines of play-by-play with ease.

Having to hit a key to go through the entire match screen by screen would have gotten old very, very quickly - trust us on that. 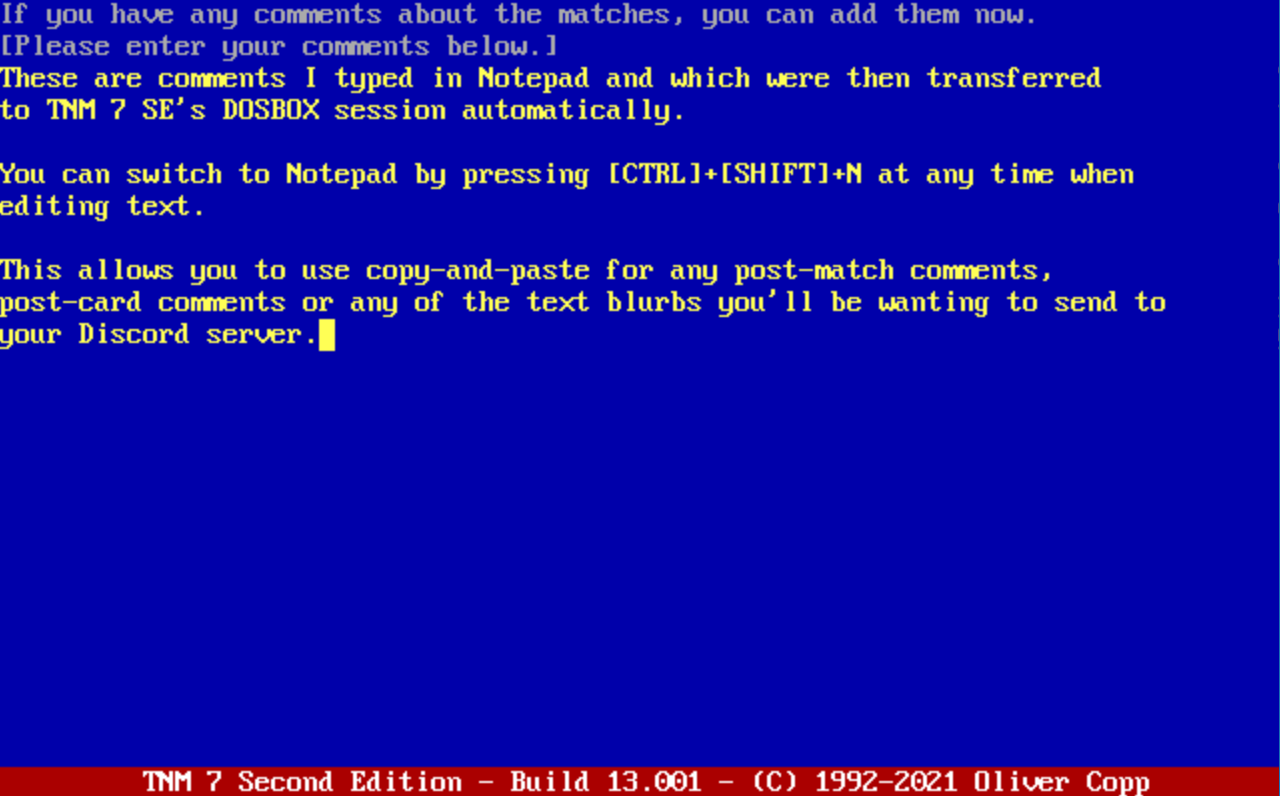 The new text browser is complemented by a new internal text editor which you can use whenever you enter post-match comments, post-card comments or anything you're about to have posted to Discord from within TNM 7 SE. More on this later.

Something that's going to come in handy for sure is the new editor's capability to open whatever is on-screen in Notepad by pressing CTRL+SHIFT+N. Copy-and-paste doesn't exist in DOS applications but this way, you can get around this limitation by simply going to Notepad, doing whatever you need to do and closing the Notepad window, only to see your text having found its way into TNM 7 SE.

When we released the ''Enhancement Talent Generator'' plugin last year, we created a need... a need for a new wrestler category in TNM 7 SE called ''Jobbers''.

You can even have the plugin add all wrestlers generated to your circuits' ''Jobbers'' category automatically if you wish.

This will let you quickly generate a whole batch of enhancement talent - and you can easily customize just how much they will be fleshed out by going into ''Settings''. 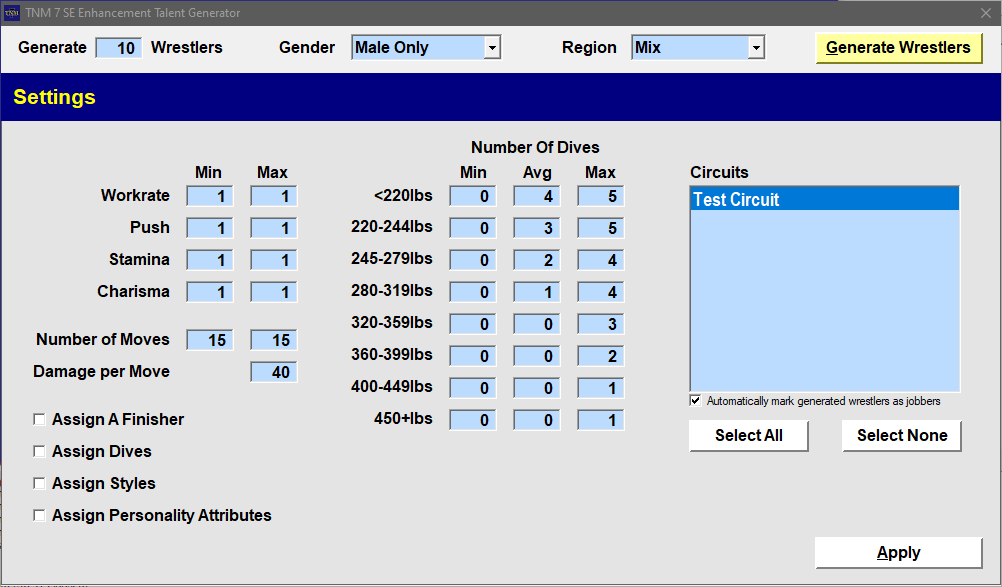 On the ''Settings'' screen, you can easily select the circuit(s) to which you wish to publish your newly-generated enhancement talent.

Don't assign them a finisher but do feel free to assign them dives, wrestler styles and other personality attributes by checking the appropriate options.

And yes, you are even able to take complete control over how many dives - if any - will be assigned to enhancement talent from various weight classes. You can go THAT deep. 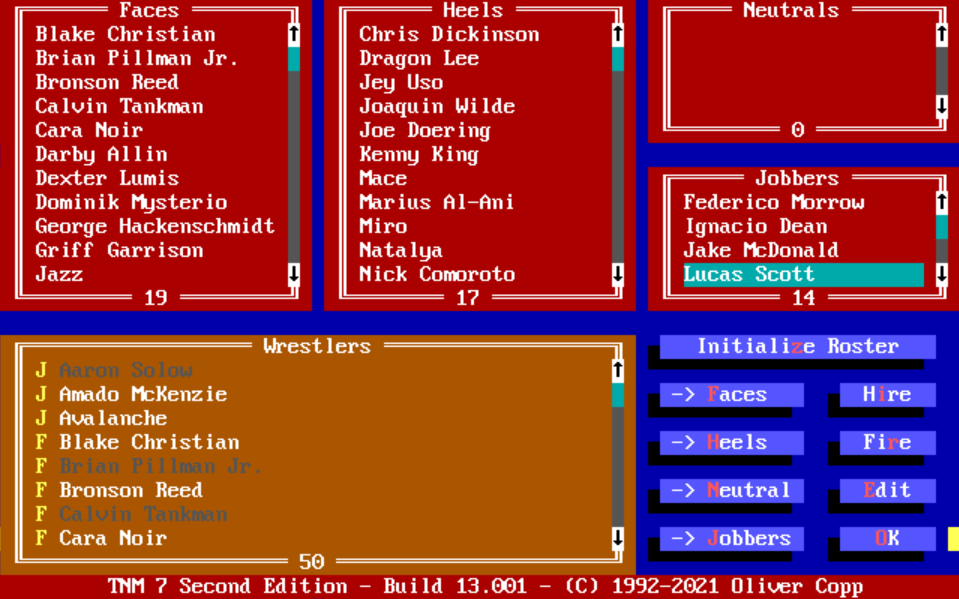 When you enter your circuit's ''Wrestlers'' section, you'll see the new category ''Jobbers'' alongside ''Heels'', ''Faces'' and ''Neutrals''.

One other detail you might appreciate is that jobbers do not need to be hired to be available in your circuits - irrespective of whether you're running in e-mail mode or contract mode.

Everybody whom you designate as being a jobber will be available for use at any time. You may, however, choose to hire jobbers if you wish - you just don't have to. 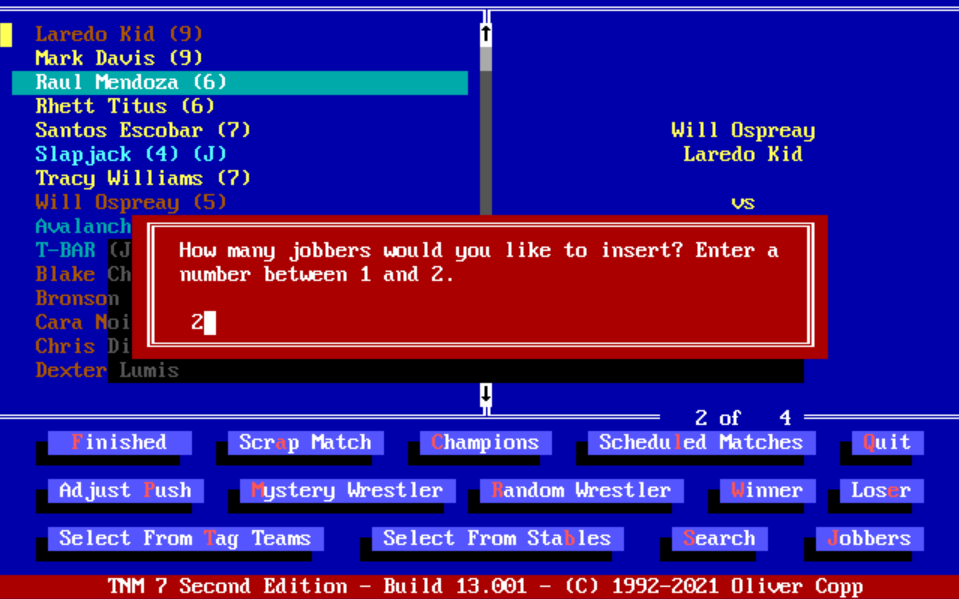 When scheduling cards, you'll notice that jobbers are designated by a ''(J)'' next to their name.

If your circuit is running in contract mode, you'll find all wrestlers you have under contract first, then all jobbers and finally all other wrestlers.

In e-mail mode, all wrestler who aren't jobbers will be listed first with all jobbers at the end of the wrestler list.

This ensures you'll always be able to find your jobbers quickly and easily. 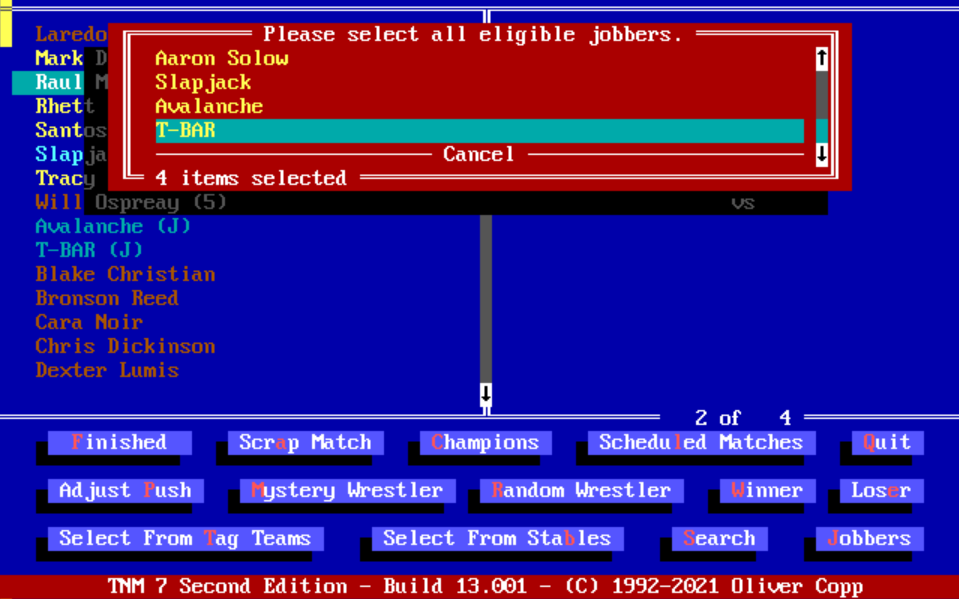 When clicking the ''Jobbers'' button, you will be prompted for how many jobbers you wish to assign. Then you will be presented with a list of all available jobbers, with the ones not having been used on the card being pre-selected.

TNM will then insert the number of jobbers you want to assign randomly from the list of selected jobbers into your match. 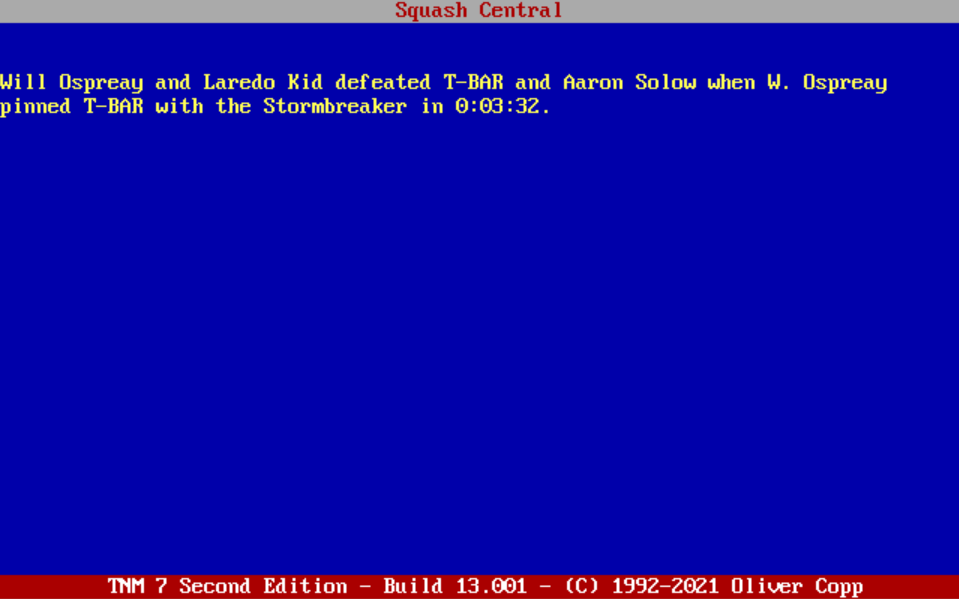 One other change coming with Build 13 is that matches involving jobbers will not receive a match rating.

This was done because squash matches would usually get negative stars and drag down your card average. TNM's match ratings algorithm was created for competitive matches. Squash matches are usually short and decisive so match ratings do not apply. 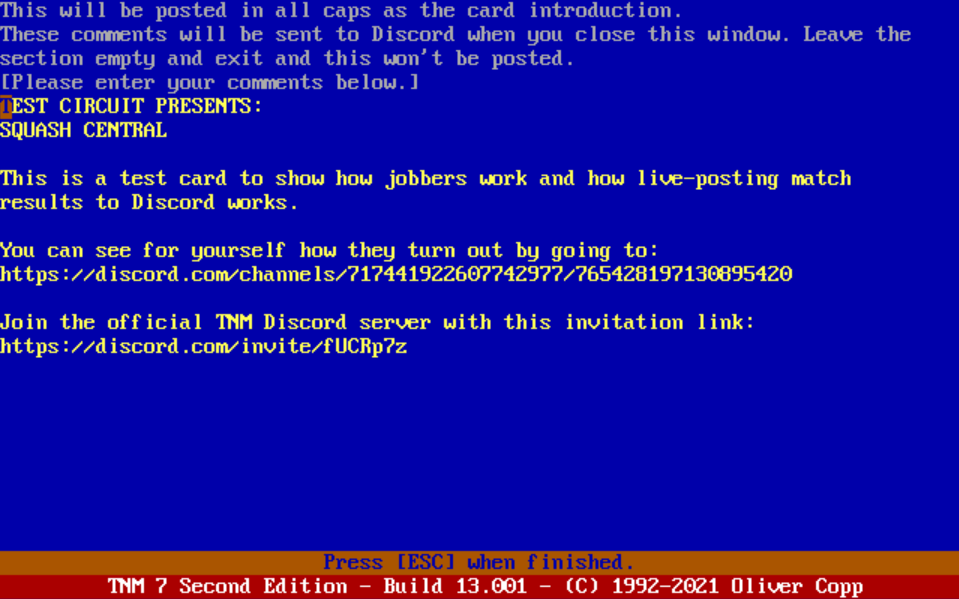 TNM 7 Second Edition is now the only wrestling simulator on the market which can live-post your circuits to a Discord server of your choosing through the TNM Live! plugin.

Once you've set up your Discord server in the plugin, every time you run a card in a circuit with an active Discord posting connection, every match result will get posted to Discord right after it finishes.

Sharing your circuit has never been this easy! 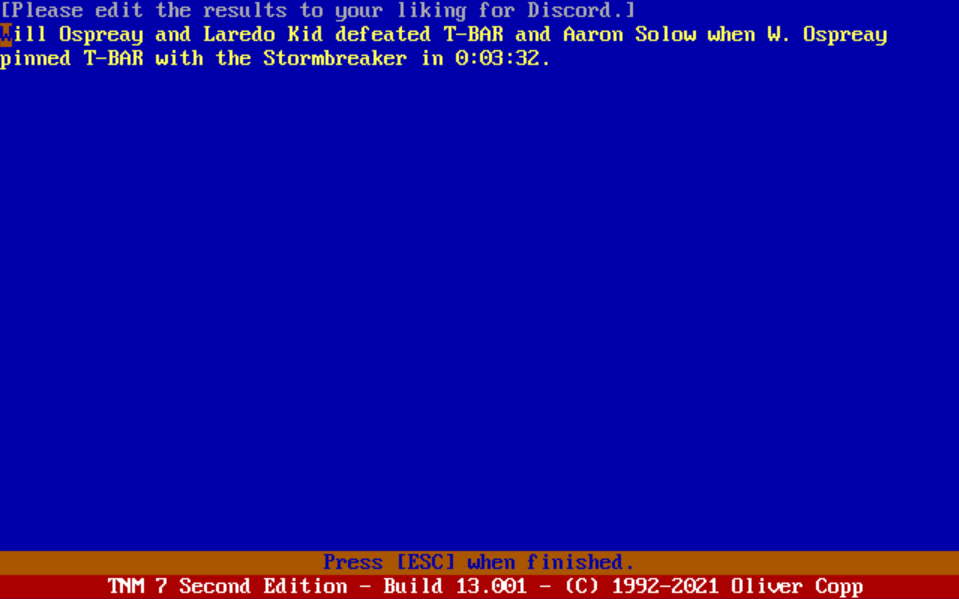 If you wish, you can even set up multiple Discord channels for cards with names matching certain patterns. You could use this to, for instance, post all RAW results to one channel, all Smackdown results to a second channel and not post house shows at all. See the TNM Live! section for more info.

The important part is that nothing gets posted to Discord without you having final approval. Make edits to match results, the play-by-play and once your done, they go out.

From card opens to pre-match analysis, results, play-by-play, post-match analysis and card wrap-ups, you decide how deep it goes. 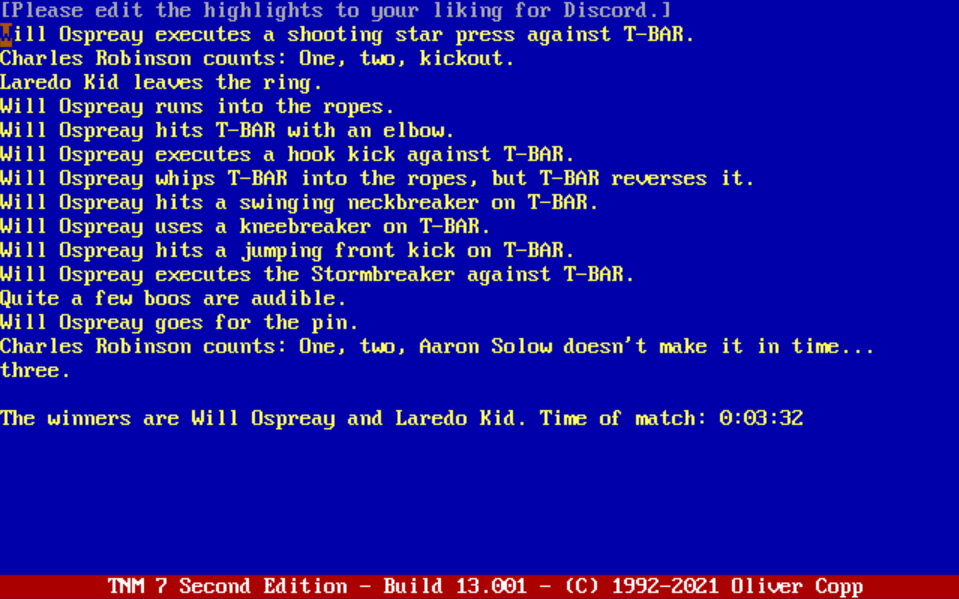 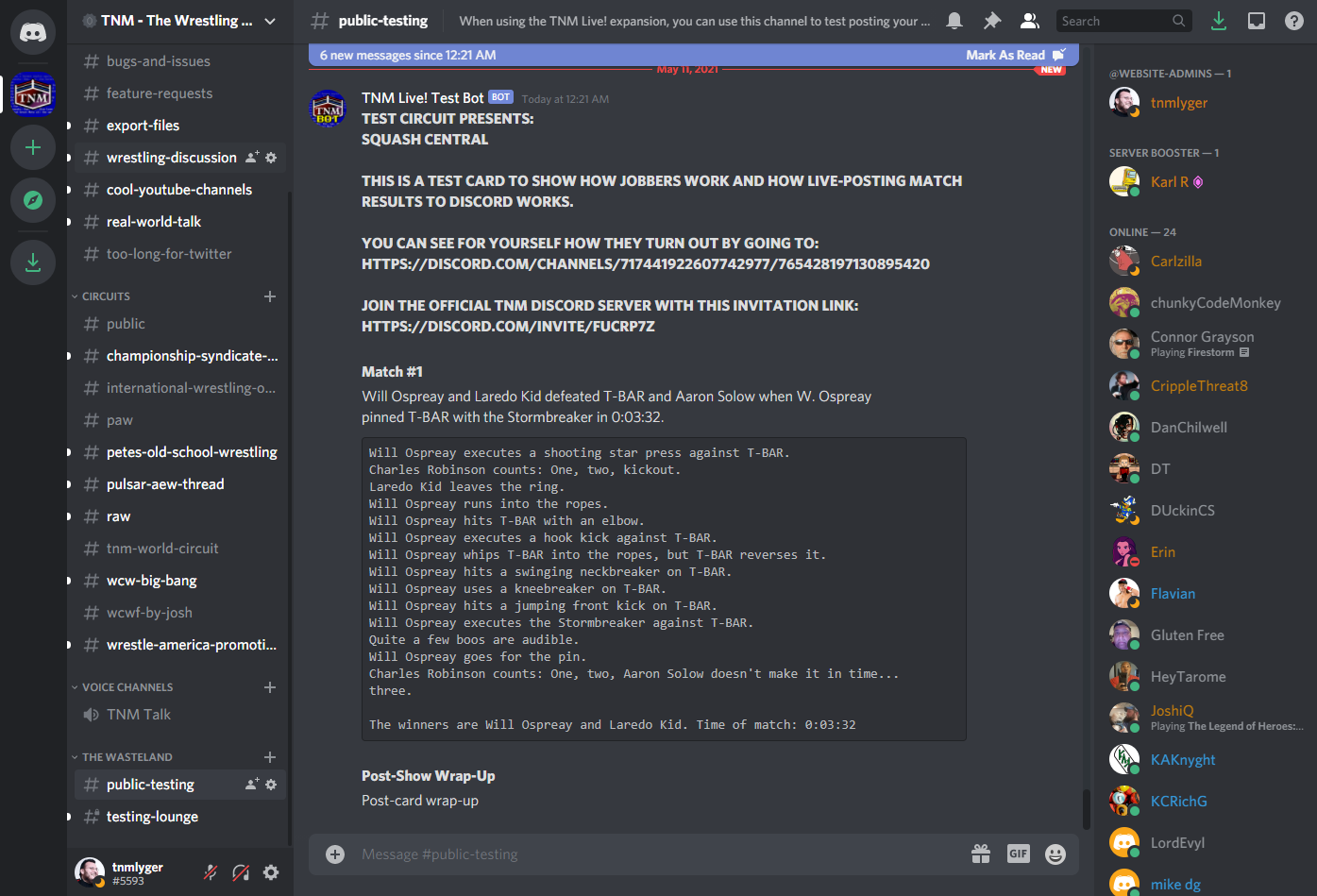 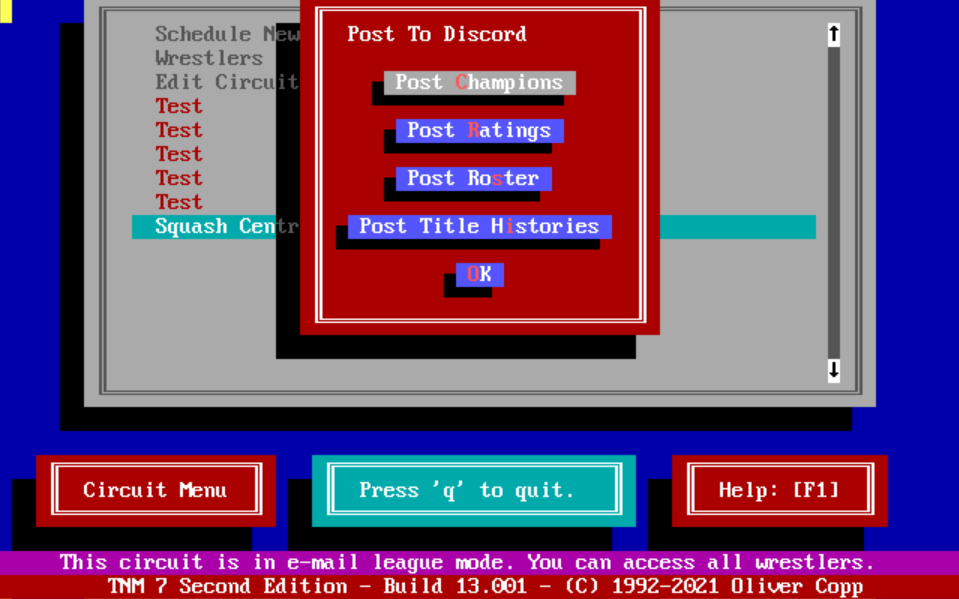 Your circuits now also contain a new Discord menu which allows you to quickly post your circuit's champions, ratings, roster or title histories to Discord.

You may notice that we've given the look-and-feel of the circuit roster a new coat of paint, listing both the wrestlers and the injured reserve in alphabetical order and no longer in the order the wrestlers appear in TNM's database. 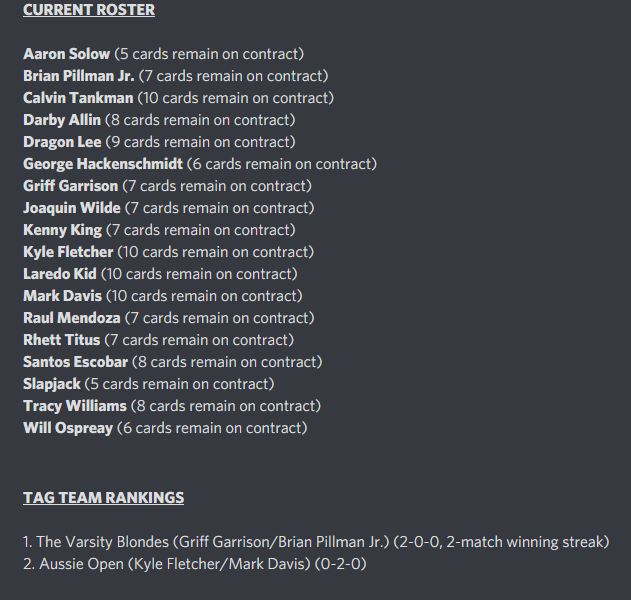 Now if you're thinking ''oh man - that's probably all really difficult to set up'', we don't blame you. Getting Discord integration right is daunting in many ways and getting consistent, good-looking formatting is a nightmare.

To borrow a catch phase from ScreenRant's Ryan George's ingenious ''Pitch Meeting'' video series, it is ''Super-easy! Barely an inconvenience!''

TNM 7 SE handles all the minutiae for you - you don't need to do anything but set up a Discord hook and then press a button. Done.

And all you need to do to set it up is run the TNM Live! plugin.

Contact us to get your very own circuit channel on the official TNM Discord server and join the circuits already being posted there. 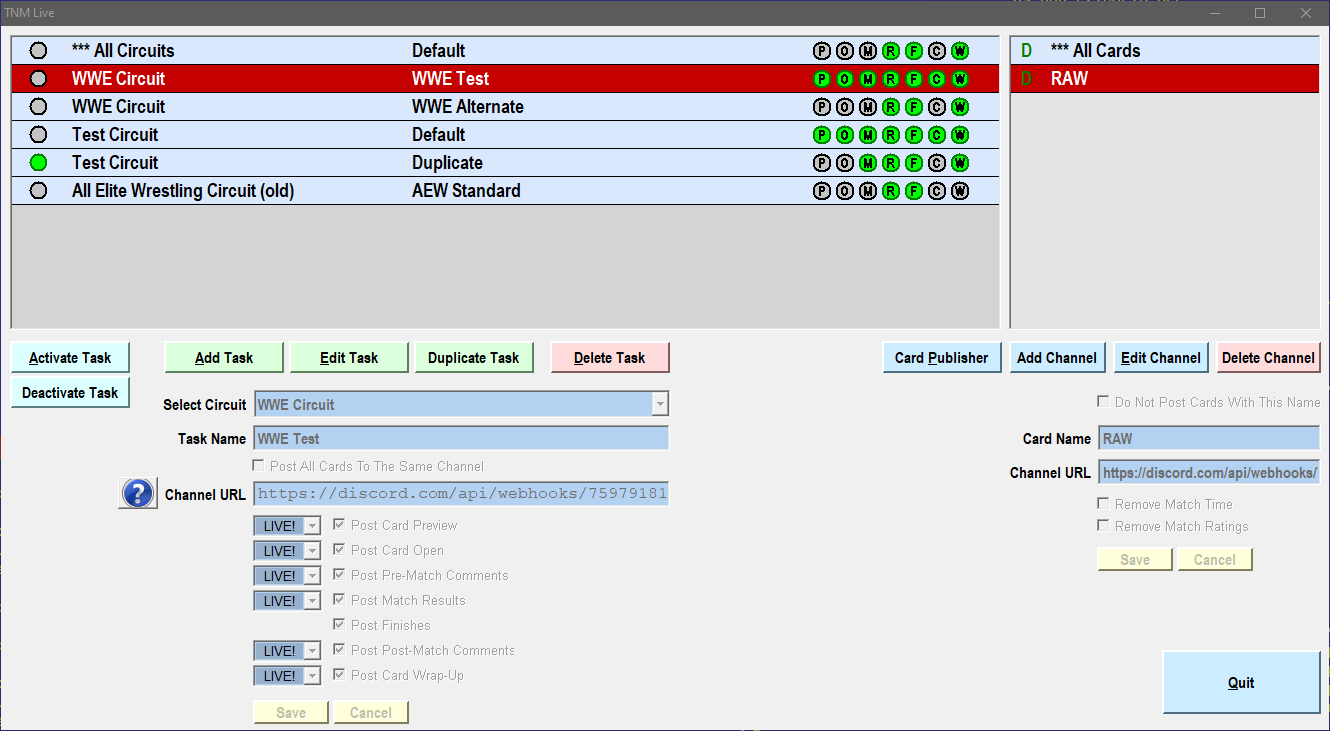 TNM Live! lets you quickly configure which circuits you want to be posted to Discord and which ones you're prefer not to have posted.

Switch individual posting rules on by clicking any gray light you see and it will turn green signifying it's active. Click it again to make it inactive.

For more information on how to set up Discord in TNM Live!, please check out this tutorial. 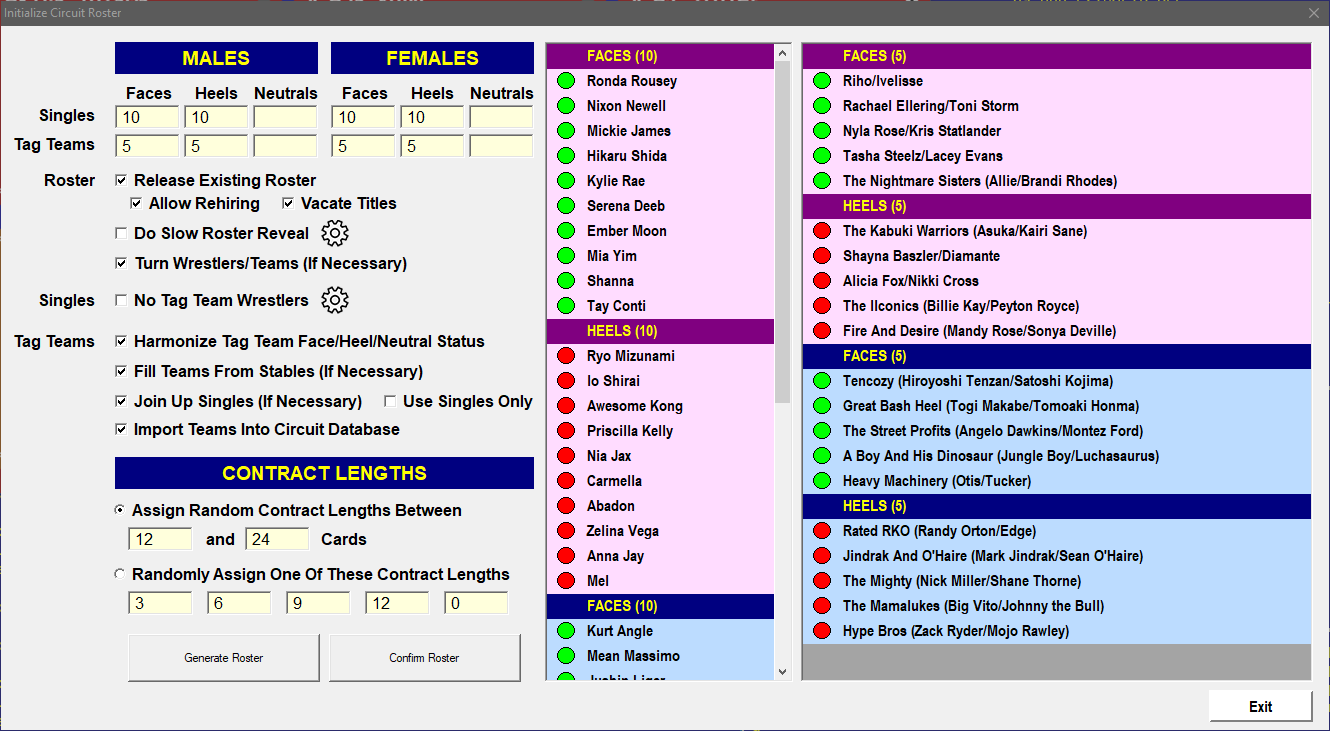 Since TNM's early days, you have had two ways of determining which wrestlers you have access to in your circuit.

You can either try to hire exactly the wrestlers you want one-by-one or you can put your circuit into ''e-mail mode'', in which case you can access the entire wrestler database for any of your cards.

But what if you'd actually like to work with contracts but don't want to have to hire everybody individually? What if you'd like to challenge yourself and start with a random (but sensible) roster with which you can then create your storylines, feuds and matches?

What if somebody quits on you or doesn't want to negotiate a new deal and you'd like to have TNM bring in somebody new?

Click here to see what this can do for you. 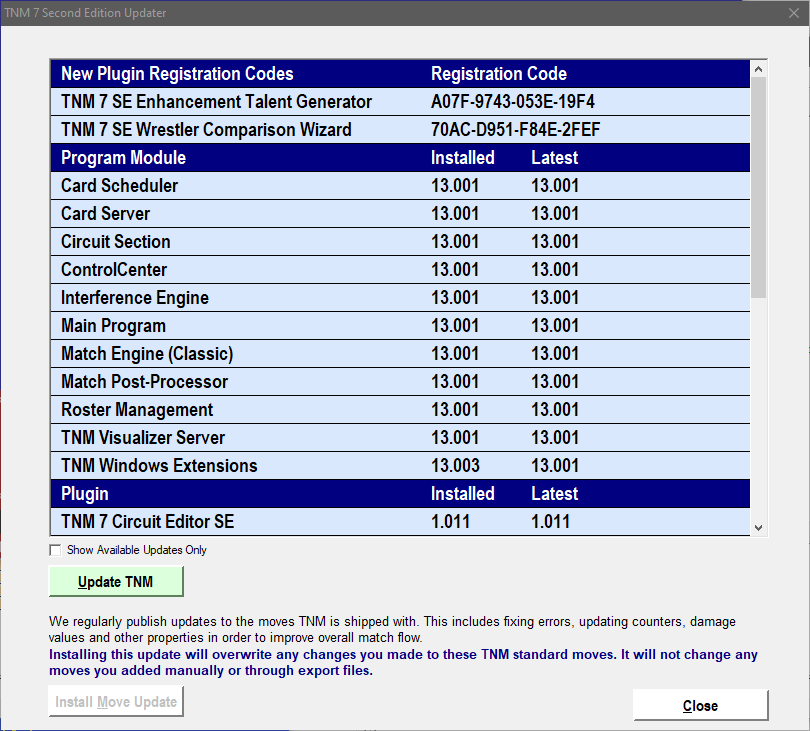 Build 13 introduces the new TNM Updater plugin which you can launch by clicking ''Check For Updates'' on the main menu.

Keeping software current is usually a huge PITA, and considering that you don't just have to keep the main program current but also all your installed plugins, the reality is that most users have a mish-mash of different code versions.

You might be mixing Build 13 with the long-outdated 1.0 version of the TNM Export File Wizard plugin, and that's asking for trouble.

With the new TNM Updater, all you need to do is click one button. It couldn't be any easier than that. One click will update the main program to the latest binaries available, as well as all installed plugins published by us.

And there's more: Whenever you order a plugin, its registration code will be available in the TNM Updater as soon as we've processed your order. No more typing endless codes - just run the Updater, click ''Update TNM'' and your plugins will magically be registered.

The only registration code you still need to enter manually when setting up a new copy is your main TNM 7 SE license.

TNM's Reference Move Database -- i.e., the sum of all moves TNM is shipped with -- sees regular updates from TNM UK's Peter Abram and myself. We have a rolling review process where we add moves, correct mistakes, update damage values, improve counters and style-specific counters and do everything we can to make the match play-by-play the best it can be.

Every time we release a new version of the TNM Reference Move Database, the ''Install Move Update'' button will turn green.

Clicking it will update all moves TNM is shipped with meaning that if you made any changes to these moves on your end, these changes will get overwritten.

Moves you have created yourself or have acquired through importing export files will not be changed or lost during this update.

Last But Not Least: Quality-Of-Life Features 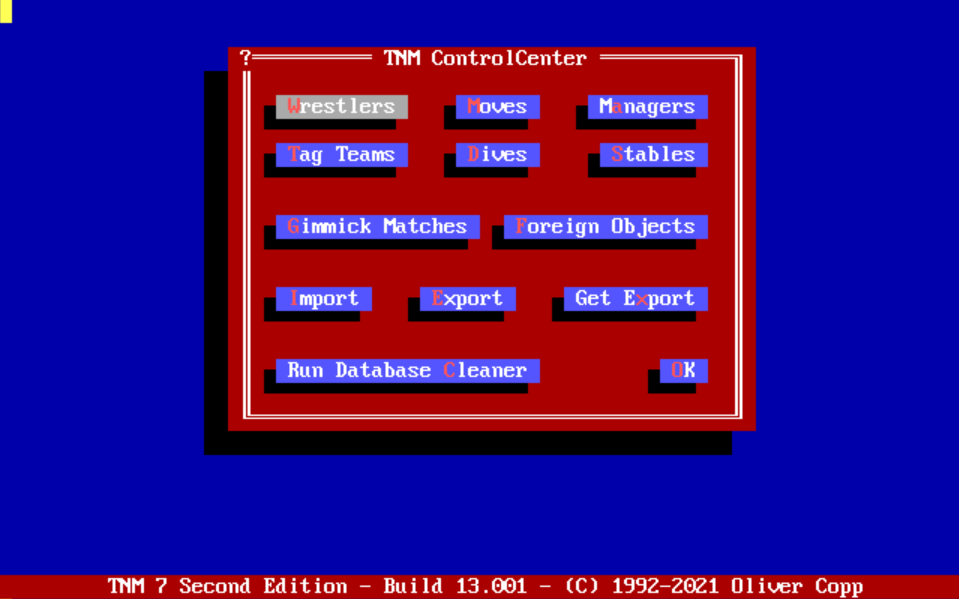 We started a review process at the end of 2020 where we challenged whether every feature was in the place you'd expect it to be and/or need it to be.

Our own plugins have greatly extended what TNM 7 SE is capable of and as the library of plugins has grown, so has the number of things which you can only do from the Plugin menu.

And why isn't the Database Cleaner plugin available from inside the Control Center?

All valid questions, and we feel we have a good solution for them. You'll find more and more button shortcuts showing up in different places in TNM 7 SE when functionality useful in this particular area is available through an installed plugin.

For the same reason, the new TNM Updater plugin can be called straight from TNM's main menu. We've also added direct shortcuts to TNM7.com, TNM UK and all TNM social media accounts - you'd be shocked to hear how many users have no idea there's an official TNM account on Twitter, for instance. Never mind Discord.

Now that we can quickly deploy new software versions to users around the world without having to issue new Builds, you can expect the user interface to get new options where they make sense.

Let us know if you can think of anything that would make your life easier.