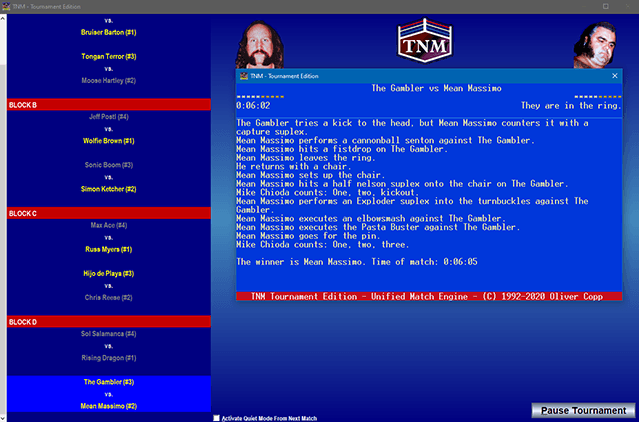 TNM Tournament Edition is the first TNM simulator created specifically for Windows. Single Elimination, Double Elimination, Round Robin, Swiss-Rules Tournaments - simulate several different types of tournaments with up 128 participants, teams or trios each. Want to have losers advance? No problem. Every match takes place in a cage? Go right ahead. 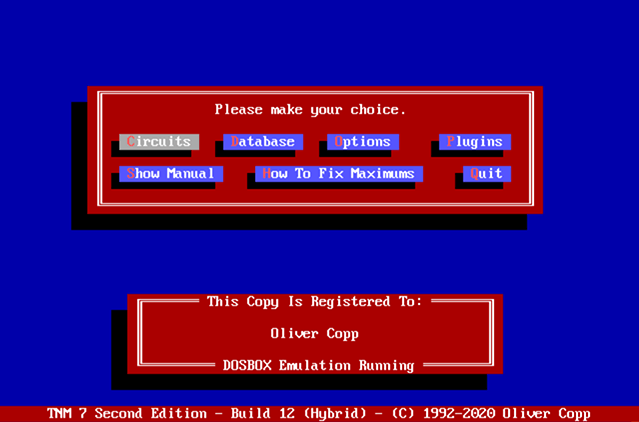 Download the four-week trial version of TNM 7 Second Edition, Build 12 (released September 1, 2020). This version of TNM runs on any version of Windows, either natively (if compatible) or in DOSBOX.

This is the right version of TNM is your focus is on running circuits. 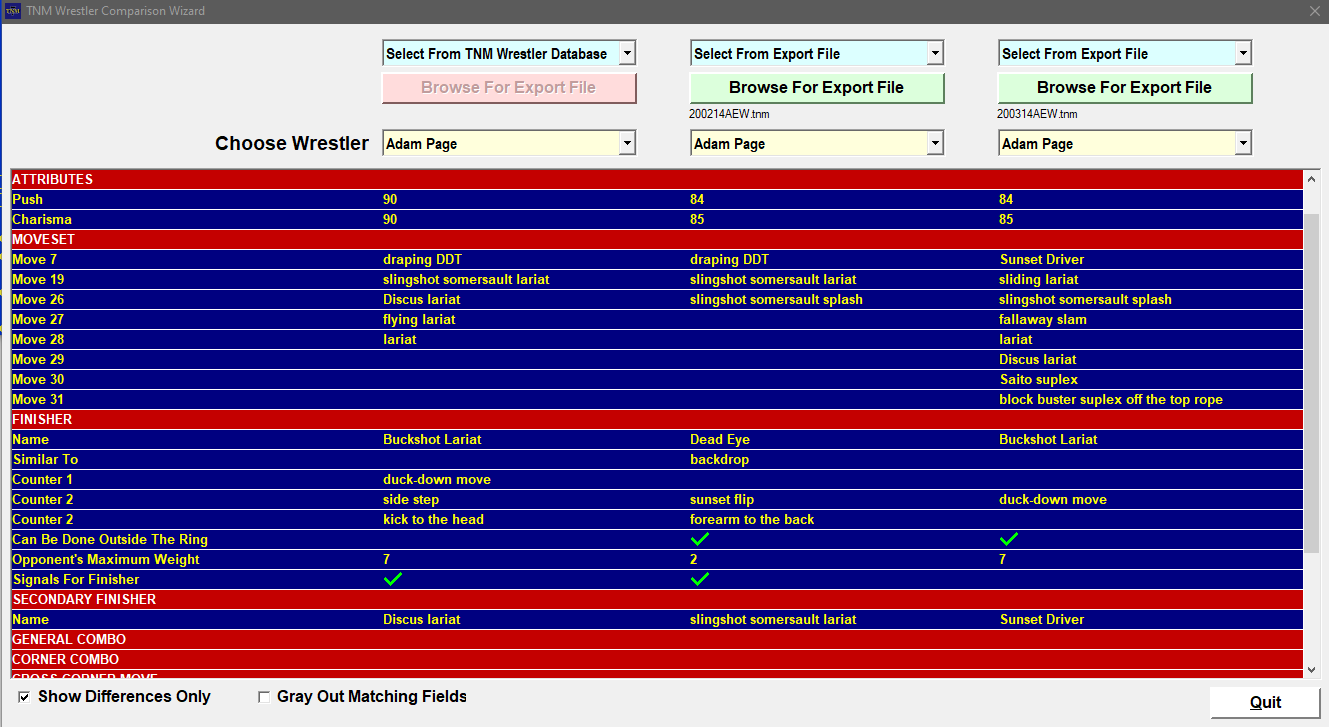 The Wrestler Comparison Wizard lets you quickly compare wrestlers from up to three sources which can be export files or your internal TNM wrestler database.

Find out in seconds how your wrestler differs from the export files you have downloaded and make an informed decision whether you want to update without going through the hassle of having to rename your existing wrestler, import the new one and then going back and forth, comparing everything about them. 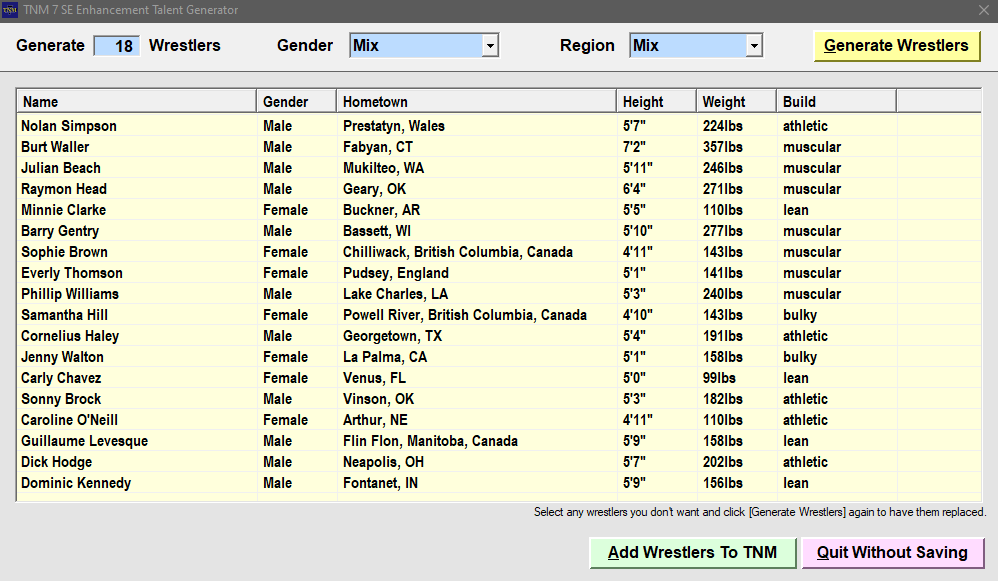 The Enhancement Talent Generator plugin lets you quickly create a whole batch of wrestlers for use as enhancement talent. The 1.3 update is a bugfix release. 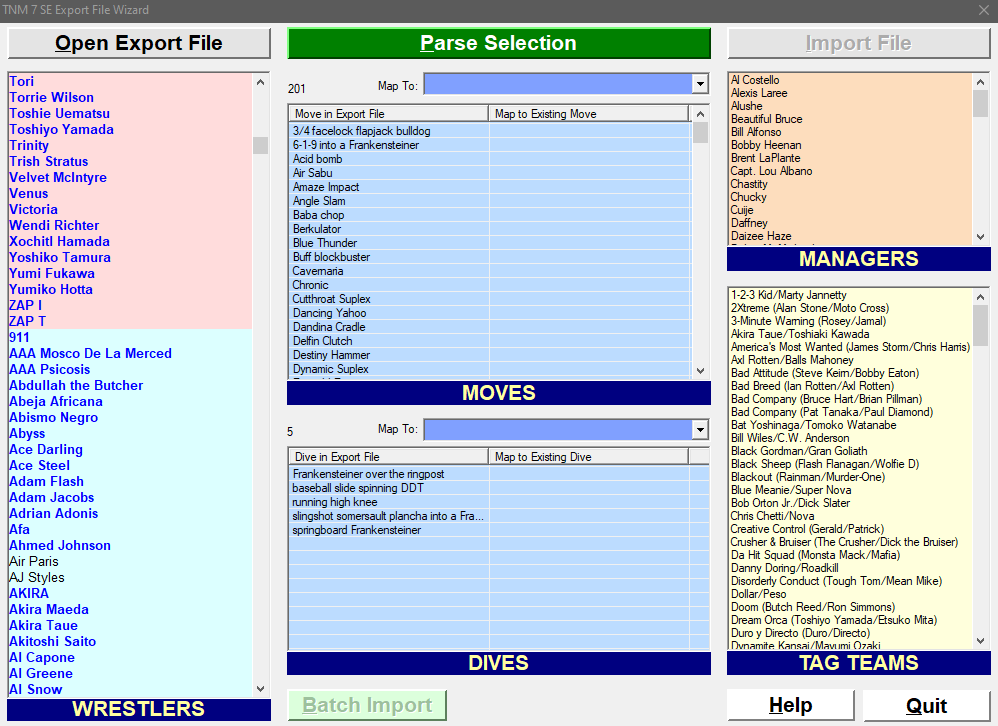 Importing wrestler export files through the Export File Wizard plugin ensures your databases remain compact and tidy. It only imports the bare minimum it needs to in order to be able to use the wrestlers you select to import from export files. And yes: it now includes a batch mode so you import a number of files quickly. This version is able to import wrestler export files made in TNM Tournament Edition. 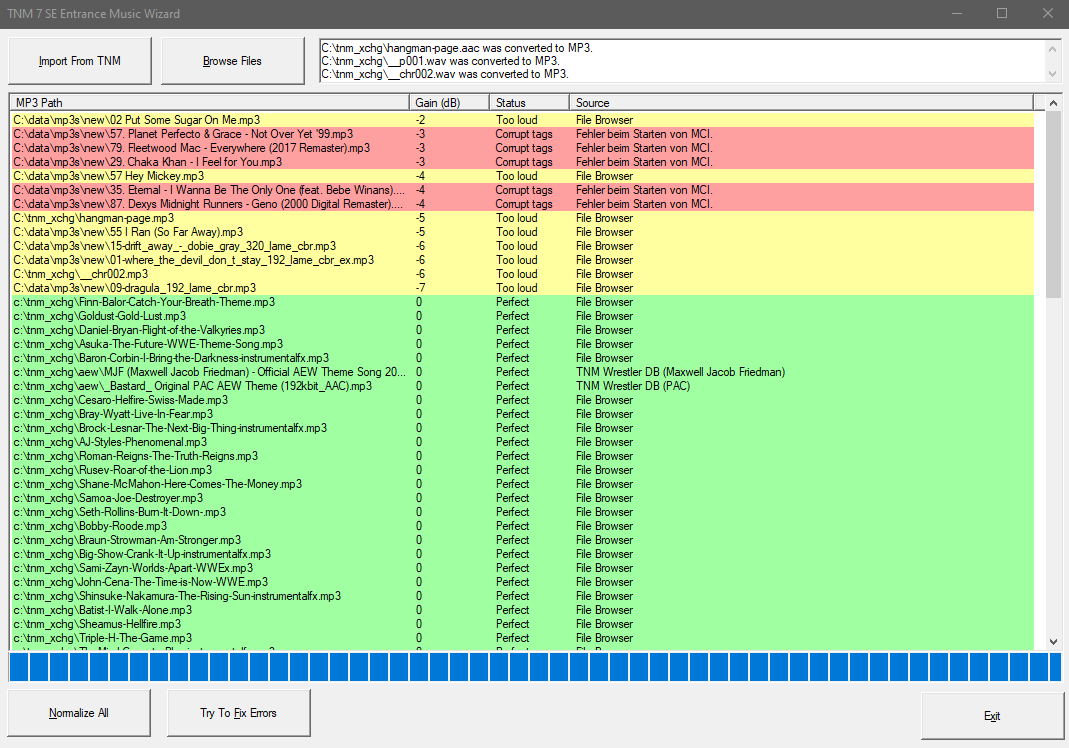 The TNM 7 SE Entrance Music Wizard is your one-stop solution to ensuring a consistent entrance music experience. It ensures all your wrestler entrance themes are equally loud. It converts most relevant audio formats into ones you can use in your ring intros. And it fixes many errors in audio files which previously prevented them from working in TNM.

The TNM 7 SE Wrestler Personality Wizard lets you create and manage unlimited different ways a wrestler interacts with the crowd, depending on whether or not he is heel or face. What you set here overrides his "working the crowd" spot and is circuit-specific. Requires TNM 7 Second Edition Build 5c or higher!

The TNM 7 SE Ratings Editor plugin lets you edit any ratings entry. You can change the name of the person(s) holding it, the number of wins, losses, draws and length of the entry's streak. Insert, edit and delete ratings entries as you please, for any ratings (singles, tag, six man) in any of your circuits.

The TNM 7 SE Circuit History plugin puts the complete history of your circuits at your fingertips. Title histories, every match that every wrestler had against every other wrestler - find out exactly what you need.

The TNM 7 SE Crowd Chant Editor lets you create and manage wrestler-specific crowd chants that appear during a wrestler's matches. From "ECW, ECW" to "He's Hardcoooore", your imagination is the limit.

The TNM 7 SE Weight Class Wizard plugin lets you add weight classes, brands and genders to your titles and ratings. Version 1.8 now integrates the functionality of the new TNM 7 SE Circuit History plugin if both are installed (and Circuit History is registered).

The TNM 7 SE Theme Music Wizard extends TNM 7 SE's functionality to allow for multiple themes for every wrestler, entrance and exit, - and even themes of their own for every wrestling persona.

This new "Reloaded" release is compatible with all TNM versions running in the DOSBOX emulator.

The TNM 7 SE Special Move Wizard plugin lets you change the name of any move for any wrestler to a custom value. I.e., you could set up a rule for all suplexes to be called Tazplexes for Taz.

Plugin which scans your databases for unneeded moves, managers, dives etc and allows you to delete them in one quick sweep.

The TNM Circuit Editor SE comes to you as a free, Windows-based tool to edit your card results, finishes and comments.

The TNM 7 SE Interview Integrator lets you add interviews to your cards. You can have them anywhere you wish. Even better, you have full control over what is said and done in the interview. Want wrestler X to jump wrestler Y ? Well, no problem - you can do it.

The TNM 7 SE Interview Integrator does not write interviews for you !

Utility which checks your database for errors and attempts to correct them. New version 1.6 also checks circuits and cures slowdowns now.

Lets you calculate the financial success of your circuit.

Fun plugin which stages a wedding between two wrestlers. Try having someone interfere in the "match". You'll have a blast.

Plugin which lets you add card statistics such as average match rating and total match time to the end of a card.

TNM 7 Match Ratings Search. This plugin lets you find all matches in a certain ratings range

Utility which lets you generate cross-references for most of TNM 7's data files.

This plugin revolutionizes the world of TNM by letting the user customize the move commentary TNM 7 produces. This beta version comes as a Windows application in the form of a TNM 7 plugin. Extract all files from this ZIP file into your TNM 7's NEWPLUGS folder.

Contains the Plugin Programmer's Reference 2.0 and the TNM 7 Database Browser 1.0. Unzip in NEWPLUGS to install.

Allows you to run a World War 3 3-ring battle
royal like WCW used to run.

Allows you to schedule a BFA match when booking a card in TNM.

TNM 7 FCA Cubed Plugin - lets you create new match types. Unzip it in the NEWPLUGS folder and look at the README.TXT file !